Discover the difference! Dental treatment in Greenville, SC that works even on “whitening-resistant” stains

Dental whitening treatment in Greenville SC ​at the holistic office of Palmer Distinctive Dentistry is as safe as it is effective, and it is sure to fit your lifestyle. Drs. John Palmer and Debra Adams use the ​KöR Whitening System​, which may be applied in office or from the comfort of home (with take-home trays). Unlike other whitening systems, the powerful KöR product is considered to be a permanent way to get a dazzling whiter smile.

What makes KöR so unique?

The color of your teeth is largely due to natural pigment and stain molecules, which become trapped in the tooth’s structure. The bigger the molecules, the more chromophores ​they contain. Chromophores are the part of each molecule responsible for its color. There is a direct relationship between the presence of chromophores and teeth that appear darker or more discolored.

The peroxide gels used to whiten teeth work by forming hydrogen peroxide that further breaks down to water, oxygen, and a number of radicals and byproducts called “bleaching factors.” These factors lighten teeth. The KöR system is considered to be a permanent answer to discolored teeth because it restores the tooth’s natural ability to absorb bleaching factors. The system floods pigments and stain molecules with factors. They completely break down big stain molecules into very small, colorless and white particles. The conditioning and responsiveness of your teeth to bleaching factors (achieved with KöR’s unique properties) make keeping that beautiful, stain-free smile a breeze! Due to the intrinsic changes that come about with the KöR system, you can maintain stunning results while still enjoying foods and beverages like coffee, tea, and wine. These staining foods and drinks might be “off-limits” with other bleaching products.

KöR also contains all of the characteristics that make whitening gels so effective and allow for optimal results, including:

Whitening gels are (intentionally) very unstable chemicals; they’re able to quickly release oxygen and radicals when introduced to the mouth. The downside of this feature is that the chemicals immediately begin to degrade when at or above room temperature. Gels degenerate even more quickly when exposed to high heat in the warehouse (during storage) or during shipping (on slow freight). KöR whitening gels don’t degrade, because they are continuously refrigerated.

Researchers have found conventional whitening gels only remain active for around 25 to 35 minutes, due to the gel being rapidly contaminated by saliva that contains an overabundance of the antioxidant enzyme, peroxidase. In turn, saliva can quickly destroy the peroxide placed in trays for whitening. Trademarked KöR-Seal trays are designed to seal the trays that contain peroxide, so saliva and other contaminants don’t degrade the active whiteners. Proprietary trays combined with high-potency gels also provide 6 to 10 hours of active whitening versus the 25- to 35-minute whitening associated with conventional systems. Time is on your side because the gels are able to thoroughly cleanse debris between and within the prisms or structural units of your tooth enamel. Your enamel regains its “youthful” ability to quickly and thoroughly absorb whitening ingredients. 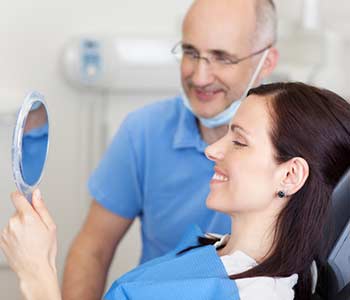 Traditionally, bleaching can make teeth super-sensitive, due to the very oxygenation process that lifts deep, stubborn internal stains. The soft dentin layer underneath your teeth contains microscopic tubes. Sensitivity arises when outside stimuli, such as heat from a warm drink or cold from frozen food, seeps through the micro-tubes and triggers the nerves or pulp in the center of the tooth. Other whitening products tend to displace the natural “plugs” in those micro-tubes, triggering tooth sensitivity. These systems have also addressed sensitivity by merely masking the symptoms. These products, however, don’t eliminate the inflammation in the pulp or nerve center of the tooth. KöR contains desensitizers. KöR’s unique formulation prevents sensitivity from occurring in the first place! KöR is designed to actively plug up the tubes, so the bleaching ingredients don’t produce the reaction that makes teeth vulnerable to painful pulpal inflammation and sensitivity.

Guests at Palmer Distinctive Dentistry can get a stunning smile that lasts – without discomfort, and extensive, costly maintenance. Call (864) 879-6494 to find out more about how the KöR system works, quickly at the office or conveniently at your home.

Back to Cosmetic Dentistry Page

Related Articles » Discover the difference! Dental treatment in Greenville, SC that works even on “whitening-resistant” stains